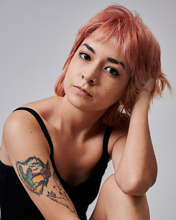 Samantha Rodriguez is a Mexican filmmaker currently working as a freelance camera assistant and producer in Las Vegas, Nevada.  As an alumnus of the University of Nevada, Las Vegas film program, Samantha has co-produced and co-directed a short film that screened at many local film festivals.  She has worked on over fifty short film and commercial sets in her two year film career so far.  Her experience working within many departments aids her to be a better producer and director.  Her work as the Director of the Behind the Scenes team on “The Big Wish” in the Coca-Cola and Regal Films nationwide contest was awarded the Best Social Media award in 2019.  She is currently the creative producer on a feature-length documentary called “Crave,” which is about the importance of art communities and the innovators that help shape them. 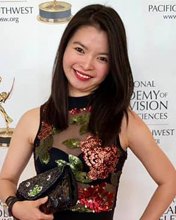 Jemsen Yumico Bollozos, born and raised in the Philippines, currently resides in Las Vegas, Nevada. In 2019, she graduated from University of Nevada, Las Vegas with a BA in Film Studies. Since then, she has worked as a production coordinator and editor for various local production companies. Her projects centered mainly on experimental films and documentaries which explore the psychology of the human condition. In 2020,  she co-directed the short documentary “I EXIST”, which won 2 student Emmy Awards–Best Short Film and Best Director. In the same category, her other short film titled “Reflection” won best cinematography/photography at the Southwest Pacific Emmy Awards. Jemsen strongly advocates for diversity in the film industry and shared such views in an interview that aired on Action News, ABC in 2020. Later that year, she directed a PSA commercial for Workforce Connections  that aired on various local channels.  Her upcoming projects include “CRAVE”, a feature-length documentary focusing on art activism. 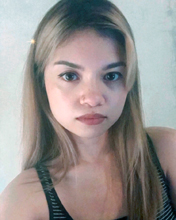 Nadine-Gabrielle Natividad graduated from UNLV in 2016 with a Bachelor’s degree in both Film Studies and English Literature. From 2016 to 2019, she wrote for the YouTube channel “Talltanic,” which had over 1 million subscribers. In that time, she also produced three short films, one feature-length film, and is an associate producer/head writer for CRAVE, a feature-length documentary. She resides in Los Angeles where she has worked for Buzzfeed, the Lot Studios, and is currently working as an Office Production Assistant for the NBC TV-show, Good Girls. One of her upcoming projects includes writing the script for a sci-fi LGBTQ love story music video (themes which pretty much describes her personality). 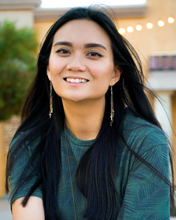 Tiffanie Rose Ignacio is a Filipina filmmaker that currently resides in Las Vegas, NV as a Freelance Film & Video Editor. From the class of 2017, she excelled at UNLV with a Bachelor’s Degree of Art in Film. Since graduating, Tiffanie has worked as a Freelance Video Editor with brands such as Adobe & Toyota and has gained extensive Coordinator-Training experience from her work on the “90 Day Fiancé” series. Collaborating with her local peers, a selection of her works have garnered an array of awards and festival admissions. Previously receiving Best Editor and Best Sound Design along with all top categories for “Comme ci Comme ça” at the 2019 UNLV Spring Flicks. Tiffanie is also one of the Co-Founders of Eccentric Artists which is a film collective that encourages an inclusive community that supports underrepresented filmmakers. Currently in development, you can find her working as an Editor for both short and feature length documentaries and music video pieces. 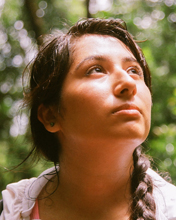 Veronica Castillo is a Mexican-Guatemalan filmmaker based in Las Vegas, Nevada. She received her BA in Film from the University of Nevada, Las Vegas. She has worked on several shorts and music videos as an assistant director and actor. Her short film, An Arrangement of Skin, won Best Audience Award for UNLV’s Spring Flicks in 2017 and screened at SSFF Spring Shorts Festival. She is also a co-founding board member of Eccentric Artists, a film collective committed to highlighting artists and forming community. Her focus is on producing and directing feature films, short films, and animated doodles. Veronica is currently producing Critical Incidents, a feature film in production for Fall 2021.