The Times We Were Living In

THE TIMES WE WERE LIVING IN 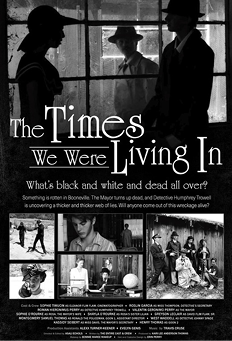 What’s black and white and dead all over?

Something is rotten in Booneville. The Mayor turns up dead, and Detective Humphrey Trowell is uncovering a thicker and thicker web of lies. Will anyone come out of this wreckage alive?

ASALI ECHOLS is a Bay Area filmmaker and film editor, whose work has screened in festivals across the country and worldwide. Her directing credits include the narrative short Fast & New (2019), the animated documentary The Violin Upstairs (2019) and the award-winning short documentary Lion on the Mat (2021). She enjoys finding visual intersections between narrative, documentary and animation, and telling stories about people who step outside boxes.