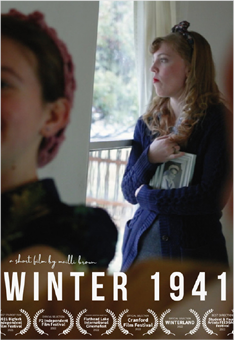 A young woman’s life is changed forever after the bombing of Pearl Harbor in this achingly beautiful short film, taking place over the winter of 1941.

Mailli Brown is a filmmaker and storyteller who is fascinated by stories of complex young women, especially in the historical and fantasy genres.

Brown grew up in Montana. At age 14 she wrote, directed, filmed, and produced the feature film CONCERNING QUEENS AND LAUNDRY MAIDS. Surpassing its crowdfunding goal and with a cast and crew of over 50 people, the movie tells the story of a young laundry maid who teams up with a runaway queen to save their kingdom from destruction.

At age eighteen she directed WINTER 1941, a beautiful portrait of a young woman whose life is changed forever after the bombing of Pearl Harbor. Winter 1941 won BEST STUDENT FILM at the Bigfork Independent Film Festival in 2021 and was an official selection in four other festivals in 2022.

Brown was also the cinematographer for A Code of Honor (post-production), an upcoming medieval drama feature.

When not busy with college homework, she enjoys fairytales, walking in the woods, knitting socks, and working on stories for future films.