Women in the Front Seat

WOMEN IN THE FRONT SEAT

Fierce, Bold, Fast, Brave! “Women in the Front Seat” paints a vibrant and diverse picture of women who not only drive their motorcycles but drive their lives. This feature documentary captures the growing movement of women hitting the throttle and riding into the wind, breaking social norms and shattering stereotypes about women and women riders.

On a transformative solo cross country quest riding her Indian Scout motorcycle, filmmaker Indy Saini challenges her own fears, facing harsh weather conditions, exhaustion and an existential crisis, to discover who these women are, why they decide to ride, and how they make the leap into the front seat. Indy’s story of growing up a mixed race kid struggling with self esteem and a sense of belonging, weaves through the stories of the women she meets, touching on the common themes of fear, freedom, camaraderie, personal permission and power.

When the journey begins, Indy doesn’t know who she will meet or where she will go. Each connection leads to another rider or another community creating the cross country path, as the many inspiring stories began to unfold: including Diamond, an Iraqi war veteran who survived a near fatal motorcycle crash inspiring her community by three years later getting back on her bike and continuing to ride; Meredith, a mother and sculptor from Providence, RI, who against the odds becomes a motorcycle mechanic gaining the respect of her all male class and helping them to gain a new perspective and respect for women; Wendy, another survivor of a near fatal crash, who made history in 2019 becoming the first female to win the the 11 day, 11,000 mile Iron Butt Motorcycle Rally; the Femme Fatales, a full leather patch women motorcycle club chapter who fiercely believe in their sisterhood; and a newly formed motorcycle group of millennials in Kansas City, who embrace a vision of who women are in the world, with unshakable power and friendship.

Next to the playful entertaining quirky moto customizations, a deep sisterhood emerges, ultimately revealing the heart behind what pushes someone to take on a daunting challenge and move to the front seat of their life. Inspiring the idea that fear is not an obstacle but something to embrace, a companion riding in the sidecar of our life pursuits, no matter what they are. 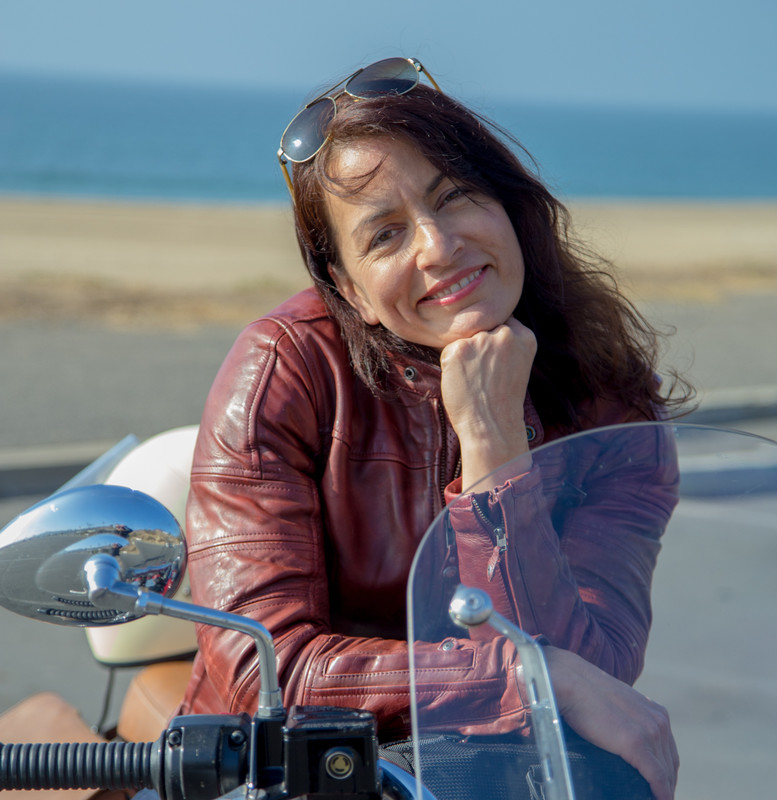 Maninder “Indy” Saini, a South Asian American director and Emmy nominated cinematographer, grew up influenced by her parents love of adventure and art. With her first passport at the age of 3, a passion for travel and the curiosity to understand different perspectives began, planting the seeds for her creative journey as a filmmaker.

Her drive for stories with deep female friendships and finding hope in unexpected places sparked Indy’s directorial debut “The Lesson,” a short film about a middle-aged Latinx woman who secretly helps the prostitute upstairs escape from her pimp, garnering international recognition including winning Best US Narrative at the Women’s International Film Festival in Miami. This success created an opportunity in the Women in Film mentoring program, during which she shadowed director/actor Charlie Haid from pre-production through post on the hit televisions shows “Criminal Minds” and “ER”.

Combining her creative mission and her passion for motorcycle riding, Indy directed and produced the documentary “Women in the Front Seat.” Captured while braving her first solo cross country trip, the film paints the diverse landscape and inspiring stories of women who not only drive their motorcycles but drive their lives.

Fueled by that project, Indy wrote the feature screenplay “Slider,” a coming of age story that takes us deep into the high speeds and defiantly windswept hair of the women’s motorcycle world. The script was selected as a finalist at the Sundance Writing Lab and the NYWIFT Meryl Streep Writing Lab. During that time, she also wrote and produced the socially relevant dramatic short thriller “The Hideout,” which screened at numerous festivals with honorable mentions and is now available on Amazon Prime.

Indy’s documentary work as cinematographer took her to the arctic to film “Ice Bear,” a National Geographic Wild special about the affects of climate change on polar bears for which she received an Emmy Nomination. As well as to Calcutta, India, to film “Soma Girls,” a short doc about educating the children of sex workers, that aired on PBS.

Dedicated and driven regardless of the pursuit, Indy also developed technical prowess as a Digital Imaging Technician (DIT) learning ‘all things camera.’ Her extensive skills and ability to excel under great pressure landed her work with master storytellers such as directors Ang Lee and David Lynch, and legendary cinematographers John Toll, ASC and Rodrigo Prieto, ASC. Her credits in this realm include major Hollywood movies such as, “Harriet,” “Gemini Man,” “A Wrinkle In Time,” and “Pirates of The Caribbean: On Stranger Tides,”and television shows including “Twin Peaks” (2017) and ”Arrested Development.”

Indy’s professional career sped out of the gate directly following her BA in theatre and philosophy from Smith College in Massachusetts, when she launched the multi-media all-new works theatre company DreamWeaver Productions in NYC. Focused on promoting diverse new voices, Indy directed and produced 5 seasons of provocative and probing shows off off Broadway. Indy’s love for theatre, crossed the coasts when she directed Neil Labute’s “The Way We Get By” for 3KO Broadway Theatre Company in West Hollywood, CA. The play was reviewed by the LA Times highlighting some of her storytelling strengths: “director Maninder Saini’s thoughtful staging cleverly links each play,” and by Backstage West: “Directed by Maninder Saini, each work ends on sturdy ground, thanks to performances that seem misguided at first and then deliver their sucker punches. Even more noticeably, the actors are superbly cast.”

In pursuit of the next adventure-filled chapter as an avid traveler and lover of nature, between projects Indy can be found hiking a mountain in a far off country or at home in Los Angeles paddling around in her kayak.